Artistic creation at the CMS experiment 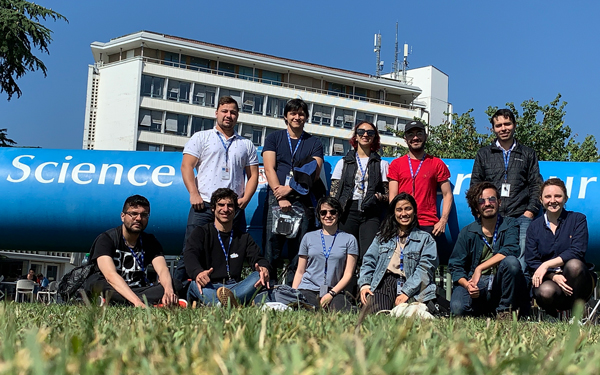 A creator — any creator, that be an artist, a scientist, a child, a musician, or a poet — arrives at CERN with the wish to learn and understand first-hand the deepest and most complex scientific topics, directly from people that have gathered to analyse, study and understand them. At the invitation of art @CMS I have had the opportunity to visit CERN on numerous occasions with groups of artists, designers, and high school students, with the purpose of  developing ideas for projects that unite art and science. The experience of seeing the CMS experiment in the company of artists, gets much closer to contemplating an artistic piece than one would imagine. We see the screens, we see the numbers, and their potential to become installations, poems, and music. We observe the machine meticulously, the cables, the colours, the accuracy in which each screw is put exactly where it needs to be, fulfilling its purpose; we study the machine the way we would study a painting in a museum, or a musical piece that seems to speak directly to us. We talk to the scientists, and we listen to their words, we try to understand their language, which seems at first encrypted, and then poetic. While hearing about the way the magnets affect the beam, the way the layers capture the different signals of the different particles, the way scientists at CMS create an image out of these numbers and measurements, we, as artists can imagine thousands of different possibilities. Beyond just depicting/illustrating what it could look like, sound like, and taste like, we aim to go further than the mere visualization of the scientific concept, we crave to understand it, play with it, take it with us, to put it in a gallery or in a poetry book, keeping it as it is, not trying to convert it into anything else.

There are steps in this creation proceedings which are very similar to the development or conception of scientific ideas. They both start frequently with a thought, a hunch, which eventually turns into an idea or concept. Both disciplines often seek to put together all the information they can find on the topic and build a theoretical and conceptual background as the perfect terrain for it to become either an artistic piece or a scientific theory, hypothesis or experiment. Along with Natalia Rivera, co-director of Suratómica , a project that strives to bring together creators from the Global South and scientific communities around the world, we aim to show the similarities of these two creation processes, and propose that the scientific method can be applied to science as well as to art. In both cases the procedure starts with a question that appears out of curiosity or observation, followed by a hypothesis, then a theory and finally a law or an artistic piece. We deduce, through the process of creation of artistic ideas at CERN, that there might be a red thread that artists and scientists both follow in the moment of creation, despite the individual ways of approaching the subject, from the initial inspiration through the development of the concept and lastly to the outcome, in either cases new knowledge is brought to the world. Science, at CERN, is as poetic and artistic as it gets.