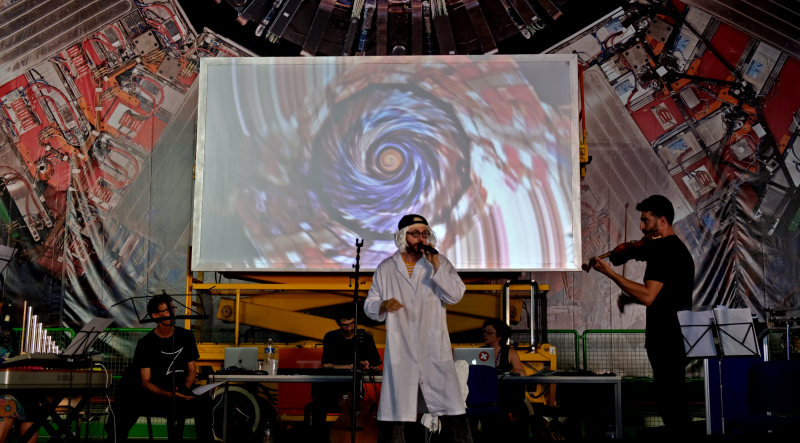 Many philosophers thought that the Desire is the driving force of the world, on both microscopic and macroscopic scales. The same Desire that moves scientists in their demanding and endless quest after knowledge.

A group of people from the association Les Atomes Dansants visited CMS last October and were inspired by the scientists’ hidden Desire. This is how Subatomic Desire was born, the new audio-visual show of Les Atomes Dansants in which scientific data of CMS are transposing into music, animated pictures, words and dance.

The Subatomic Desire show premiered at the CERN Globe of Science and Innovation, and was then shown at the CMS experimental site, in front of an intrigued public that had never thought about CMS detector in a similar way before.

One of the main goals of the artists was translating muon trajectories into sounds and images. “We have used data events, including Z, W, and Higgs bosons decay events in many different ways.” said the video-performer Silvia Fabiani.  “For example, our composer Alexandre Traube used the data to define timing and a harmonic structure for sections in which the musicians can improvise. Our musicians deploy their talent inside the frame provided by the harmony and the rhythm. I also included the data inside my animated images. The animations come from a code that I wrote and that it is based on CMS data”.

The sense of Desire wasn’t the only thrill that Les Atomes Dansants felt during their CMS visit and brought back into their show: “A feeling of no limits” said Silvia Fabiani. “We all had this feeling of freedom. The scientific research is unlimited, in some way, because today you discover the Higgs boson and in some years we are gonna discover something else. Is always going on and on. Furthermore, the identity of these particles that are not really particles nor waves represents a challenge: they have no shape, no color and you can not detect their precise locations because all is a cloud of probabilities. This is a sort of vertiginous dimension that makes you completely disoriented but at the same time very intriguing and stimulating”.

While Les Atomes dansants wish to continue this dialogue with the scientific world and are planning to bring Subatomic Desire to other cities and countries, the CMS experiment and its scientists will continue their research powered by their inner Desire.