On Seagull Soup and Coffee Deficiency: Night Shift at CMS

This is a guest post by Anna Wilson and Eleanor Harris, who spent a week interning with CMS in April 2015. 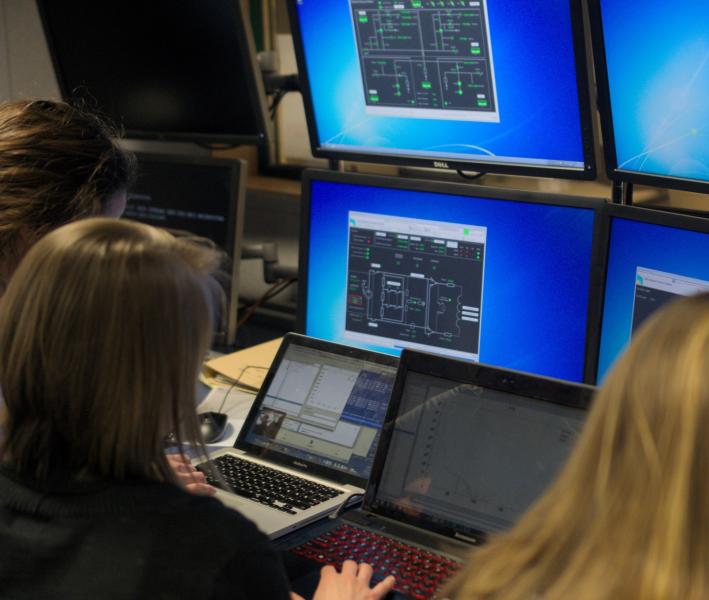 More than half a year, a school trip to CERN, and a round of 13TeV collisions later, the week-long internship we completed at CMS over Easter is still the most awe-inspiring experience of our lives so far.

After almost a year of email exchanges with Dave Barney, then project manager for ECAL at CMS, the initial excitement of our placement seemed to become buried further and further under piles of administration. The idea that we were ever actually going to get there still felt like a dream (we’re lying, neither of us could sleep for about a week before).

From the moment we landed on Easter Monday, we were flung at full force into the post-'big switch on' mania; and we discovered that the life of a physicist working at CERN is, well, weird. Now, we don’t mean weird in the sense that they’re designing machines to research the mysterious disappearance of an entire universe's worth of antimatter that, on contact with ours, should annihilate absolutely everything; or that they’re searching for this strange ‘dark matter’ stuff without which the characteristic motion of our universe would be impossible (although they are doing these things too).

Upon arrival, we were welcomed into a meeting reviewing the progress of the first day of the first run of the CMS detector since the end of Long Shutdown 1. Despite knowing zero jargon, and next to nothing about the experiment, the meeting was pretty engaging. We kept ourselves busy calculating the Mac-to-other-laptop ratio (it's really an astounding number), as well as the people-named-Dave-to-female ratio at CMS – about 1:1!

We were quickly snapped up by Achintya Rao for a tour of CMS, our first of two that day. This was our first encounter with the immense volume of information that lays the foundation for such a huge project. We had stepped into something much bigger than we could ever have imagined.

We spent the evening waiting impatiently for a text from Dave. The night we arrived, CMS was preparing for a round of splashes to test out the detectors after the big-switch-on. We got in around 11 pm, just in time for the first round, or so we thought; only the splashes didn’t come at 11, or at 12, or 1, 2, 3... In fact, the splashes wouldn’t come until the next night, though we remained oblivious to this fact until 4:30 am.

Although spending the entirety of our first night awake in the CMS control room wasn’t originally part of the plan, some of our fondest memories of the trip lie in the conversations we had in those long, sleepless hours; it’s truly amazing what you could be doing instead of sleeping, especially in a room full of extremely excited, tired and quite astonishingly clever people. We spent hours discussing the whole of the LHC with André David (there are a LOT of experiments); watching Doctor Who on someone’s laptop (despite the vast array of flat-screen look-a-likes, i.e. computers, littering the walls); ordering pizza from a vending machine (yes, that’s a thing); eating pure sugar disguised as a huge variety of different foods; drinking (fake) tea; and speculating over the most important question of the night: did the seagull soup taste delicious? (See end.)

While we spent Tuesday morning in bed, recovering from the unforgettable experience of the night before, Dave and the other physicists were hard at work. Meeting Dave at the main site in the early afternoon, we wound our way through the numerous office blocks towards the back (or the middle, it’s so big it’s hard to tell) of the site. We arrived in a smaller building where we had our photos taken, processed and printed into our very own CERN access cards! We immediately went to test these out at building 13, in which we looked at some microelectronics before heading over to the cafeteria for lunch. Now, for those who have never been to the CERN cafeteria: go. It is quite possibly one of the coolest places we’ve ever been to, and is complete with every kind of food you could possibly imagine, in every variety conceivable. Being near France, it seemed only fitting that it was over freshly made crepes that Dave proceeded to teach us all about the quantum universe on the back of a paper napkin (a lot of physics is discovered this way, you know).

At 10 pm we were back at CMS for what promised to be a more successful night of splashing. The atmosphere as we entered was completely different; it was hectic: everyone was excited, talking feverishly in apparently whichever language suited them. Everyone was doing something; everyone was needed and was working together seamlessly (almost); it was really quite amazing to watch. In the end, we had to wait until past midnight, but the splashes finally came. Everyone congratulated each other over sparkling wine and a team selfie. The atmosphere was electric.

Wednesday morning brought us back into CMS for a 9:30 am meeting discussing the events of the previous night (we were getting pretty apt at following these meetings by this point). After lunch, we were taken to an office in which sets of electronic chips were being tested for possible use in future detectors. We were set up with a circuit board, a set of chips, a sheet of stickers and a vacuum sucker pen (look it up) and then left to test actual chips for actual use in actual future detectors. Awesome.

We ended the day with another meeting, lasting an impressive three hours, discussing the pros/cons of a couple of ideas of detectors to replace the current ECAL in CMS. Despite becoming almost totally lost after the first two slides, the meeting was far from dull, and proved to be a genuinely enriching experience. It gave us a realistic insight into what working at CERN might look like (a lot of meetings, apparently).

On our last day we were shown the CMS Event Displays used in Particle Physics Masterclasses, in which we analysed past collision data to find the ratio of W+ bosons to W– ones. This is a great tool as it can be accessed from home and allows you to learn and understand what is actually going on inside CMS – we highly recommend it! Look out for those Higgs bosons!

Yet perhaps our most enlightening experience didn’t lie in the experiments, or in the research, or even in the cafeteria, but in the people. We came to CERN expecting to find a solely work-focused environment, but it isn’t the work that lies at the heart of the organisation, it’s the workers themselves and all the quirks that they bring. Their sensitivity was evident in the ‘Lost your glasses? Help yourself’ spare-glasses box sitting at the entrance to the CMS office, for those days when remembering your glasses is just not a priority. Although this is impressive forward-planning, for a bunch of extremely clever people they have a strange resemblance to a group of over excited teenagers; their diet, too, consists mainly of sugar disguised as a huge variety of different foods enabling them to stay awake until the early hours. Working in a place like CERN there are a lot of hazards in the experimental areas, reminders of which are constantly displayed by the numerous ‘Oxygen-Deficiency Hazard’ posters. Another just-as-real and just-as-dangerous hazard faced is the ‘Coffee-Deficiency Hazard’, signposted next to a machine which serves some form of hot drink that they foolishly tried to pass off, to two British students, as tea. They have an efficient system for keeping track of their equipment including a sign in the centre of the office which reads ‘if you can see this message, someone’s taken the iPad’. Except it has apparently been visible for quite a few months now.

Our trip to CERN was simply incredible and we are eternally thankful to everyone there who made it such an unforgettable experience! We had the most fun, learnt so much, and sincerely hope to return. To all those who took the time out of their busy schedules to talk to us and who we haven’t mentioned, thank you; you are all awesome. To anyone considering a trip/internship – go for it!

Two people walk into a restaurant. The first person orders seagull soup. The waiter brings him his soup. He takes one spoonful and shoots the other man in the head. This was somewhat justified. Why?