Meet the 2020 CMS Thesis Award winners and learn more about their research! 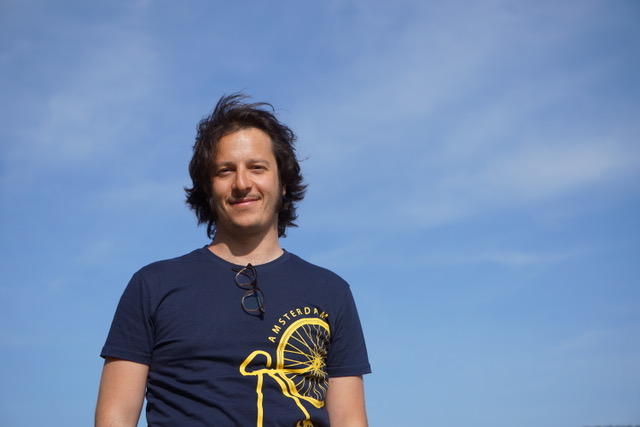 My name is Matteo Defranchis. I studied physics at the University of Milano-Bicocca, in the city where I was born and grew up. In 2015 I joined the CMS Collaboration, and in 2016 I left for Fermilab in Chicago where I worked on my master thesis project. I continued my research career as a PhD student at the DESY laboratories in Hamburg, where I obtained my doctoral degree in 2020 with the University of Hamburg. I am now working as a research Fellow at CERN in Geneva.

Quantum Chromodynamics, or QCD, is the theory that describes the strong interactions between the fundamental blocks of matter: quarks and gluons.

According to QCD, the intensity of the interaction rapidly decreases as a function of the energy scale of the process. This fundamental quantum effect, known as the running of the strong coupling constant, has been established at different experiments in a large range of energies. A similar mechanism, known as the running of the quark masses, predicts that the masses of quarks decrease at higher energy scales. Any deviation from the expected behaviour can be interpreted as indirect evidence of the existence of physics beyond the Standard Model.

This is particularly interesting in the case of the top quark which, thanks to its large mass, could act as a bridge between the Standard Model and several possible new physics scenarios. For this reason, top quark measurements have received increasing attention from hundreds of scientists working at the Large Hadron Collider in recent years.

In my PhD thesis, the running of the top quark mass is investigated for the first time ever. The results confirmed that the observed running is compatible with the prediction of QCD, within the limits of the current precision. This measurement attracted the attention of the experimental and theoretical communities, and triggered developments that could significantly improve the result in the near future. This result is the outcome of almost four years of work in close collaboration with several other experimental and theoretical physicists, with different areas of expertise. 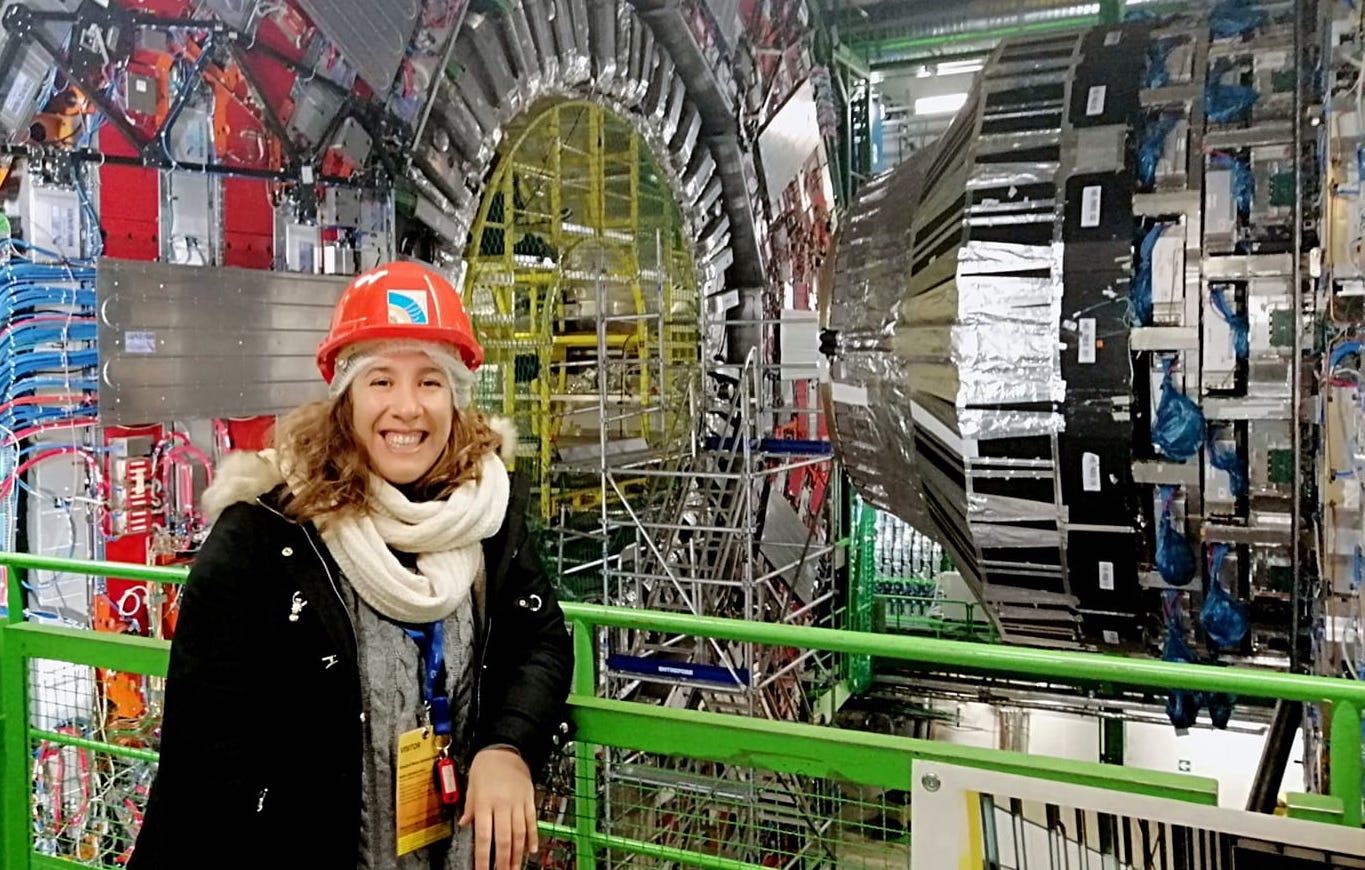 My name is Cristina Martin Perez and I come from Spain. I am an experimental particle physicist interested in data analysis and detector hardware. My background is quite peculiar, as I obtained a degree in journalism before physics! I joined CERN for the first time in 2013, working on science communication for the Future Circular Collider (FCC) design study. This experience boosted my passion for particle physics, and I decided to fully engage in the field. I studied a master’s degree in High Energy Physics at ETH Zurich and Ecole Polytechnique Paris. This is when my collaboration with CMS started, eventually leading to my PhD at LLR in Ecole Polytechnique just after. After completing it last year, I am currently working as a postdoctoral researcher in the Mu3e experiment at ETH.

As part of my PhD research, I studied the interaction between the Higgs boson and the top quark, the two heaviest particles known.

The strength of the interaction can be studied in hadron colliders via the associated production of the Higgs boson with one (tH) or two top quarks (ttH). Compared to the many possible outcomes of the proton collisions, these processes are very rare; hence, identifying them is a huge experimental challenge!

To this end, the first part of my research was dedicated to the optimization of the CMS trigger, in particular to the selection of tau leptons, to which the Higgs boson often decays. In this context, I especially enjoyed the freedom to develop innovative algorithms in view of identifying the tau lepton signature in extremely harsh experimental conditions. The second part was devoted to the search of tH and ttH making use of the full dataset collected during Run 2 for the first time. I was thrilled to take part in such a high profile data analysis, where I used sophisticated multivariate methods to identify these rare processes.

The results constitute the most precise measurement of the tH and ttH cross sections to date! These findings are essential to probe the Standard Model but also to explore possible physics beyond, in view of unveiling the hidden mysteries of the field.

I am a 30-year-old experimental particle physicist who grew up close to the beautiful Harz mountains in the middle of Germany. Having always had an extraordinary interest in natural sciences, I started to study Physics at RWTH Aachen in 2011, and am currently an applied fellow at CERN. Conducting research at the forefront of science with the goal of shedding light on some of mankind's biggest unanswered questions has been my primary motivation ever since I joined the CMS Collaboration in 2014. But, while searching for a certain production mode of the Higgs boson in the early CMS run 2 data for my Master’s thesis, I further understood that one of the underlying prerequisites for making optimal use of the LHC collisions is a properly operational particle detector to begin with.

Due to the expected increase in the number of simultaneously occurring collisions and the higher flux of particles going through it, the CMS detector needs to be upgraded before the High Luminosity phase at the Large Hadron Collider. One of these upgrades consists of the replacement of the current endcap calorimeters with a novel highly granular calorimeter (HGCAL).

Coming to CERN as a doctoral student funded by the Wolfgang Gentner scholarship in 2016, I was both fascinated by the HGCAL conceptual design as well as attracted by the prospect of applying novel machine learning methods for the reconstruction of its data and therefore joined this project shortly after. In the following three years, I was heavily involved in the testing of HGCAL prototype calorimeters with particle beams. With this data, I could show in my thesis the full functionality of its silicon-based design. Overall, this represents an important milestone towards the realisation of this ambitious calorimeter.

What I particularly cherished about my doctoral studies was the opportunity to continuously learn and apply new concepts and skills that cover a broad spectrum of competencies relevant for successfully conducting test beams of such calorimeter prototypes:

From the development of the associated experimental infrastructure, to the implementation of the calibration and reconstruction algorithms deploying deep learning methods. Furthermore, I have enjoyed the possibility to pursue other, rather unrelated, research at this time, such as studying generative modelling of granular calorimeter data based on deep neural networks.

Most importantly, however, I am appreciative of all of my colleagues who formed a dynamic, collaborative and productive work environment especially during the intense weeks of test beams at the different facilities. I think we are all proud to have experimentally demonstrated “5D calorimetry” with realistic HGCAL data for the first time.