The last of the single tops

Recently the Tevatron reported the observation of the production of single top quarks in the s-channel. Last Tuesday there was a very interesting seminar at CERN presenting the results that also was a nice overview on the timeline of single top physics at the Tevatron. This discovery is a big deal. The s-channel was the last one still to be observed from the three main single-top production modes, the other two being the t-channel and the tW associated production .

With the first evidence of the production of single tops in 2006, the Tevatron experiments, that discovered the top quark in 1995, were entering a new era in which they had enough data and knowledge of their detectors that they could start exploring rare top processes. The s-channel discovery is the icing on the Tevatron’s single-top cake.

At hadron colliders, top quarks are produced mostly in top-antitop pairs (via the strong interaction); single-top production (which happens via electroweak interaction) involves just one top quark and is much rarer. Single-top processes have just a fraction of the production cross-section (i.e. rate of production) of the top-pair production, and are more affected by backgrounds, which are much larger as well (mostly by top pairs themselves). That is why they are a very good Standard Model (SM) scenario in which to exercise the potential to extract small signals.

It was therefore a really good sign of the discovery potential of the LHC to approach Tevatron-levels of sensitivity to this particular kind of processes in just one year of operation. The rate of single-top production is comparatively very large at the LHC, and ATLAS and CMS could present their first single-top results in 2011. This was a major milestone of the early data-taking and the work was just starting.

The LHC, which is considered a top factory, has produced (and the experiments have recorded) enough single-top processes that the t-channel production (the process with the largest cross-section at the Tevatron and the LHC) has been not only observed, but used to perform several measurements of the top quark’s properties. CMS reported last summer the observation of the tW associated production, a process never seen before (not accessible at the Tevatron due to its very small cross-section there). The tW production can actually be seen without problems above the background in distributions, something unthinkable before the LHC.

Moreover, s-channel events have a signature with one top quark in the final state accompanied by a b-quark, like this: 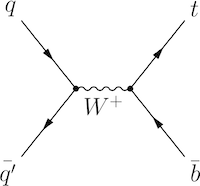 Top quarks decay almost 100% of the time to a b-quark and a W boson. A signature like this one, with two b-quarks and a W-boson, is largely affected by top-pair production (two b-quarks and two W-bosons). And from the Tevatron to the LHC, top-pair production goes from ~8pb (Tevatron) to ~246pb (LHC@8TeV). With a background that grows by a factor of 30 and a signal that increases by just a factor of 5, in a process that was already complicated to discriminate, it is clear things do not become any easier at the LHC.

However, this channel is very much worth the efforts. The s-channel is very sensitive to new physics, in particular to models involving the existence of new particles (like W’ bosons or charged Higgs bosons).

The first CMS results concerning the s-channel came after a lot of hard work at the end of last year. It was presented for the first time at 2013 PASCOS and was featured again at the ongoing "Recontres de Moriond" meeting.

The analysis looks for s-channel events with electrons or muons in the final state (W decaying into a lepton and a neutrino) and uses the full statistics at 8 TeV. There is no single “golden variable” that can discriminate single-top s-channel from top-pair production, so a multivariate approach, using all the possible information, is followed to extract the signal. A multivariate discriminant based on Boosted Decision Trees (BDT) is built with a number of variables, separately for final states with electrons and muons: 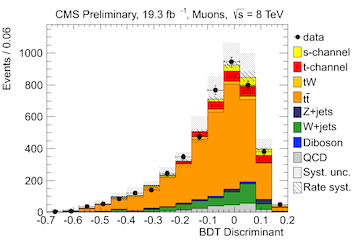 Can you see the s-channel component? Let me help: 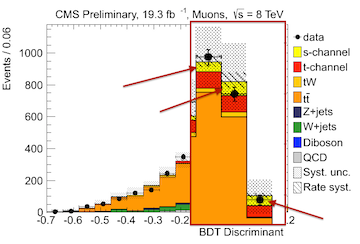 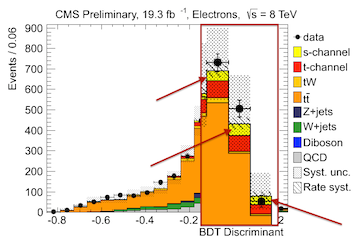 Yes, it is THAT tiny. Considering the systematic uncertainties that have an effect on the measurement, the observed significance of the signal is just 0.7 sigma (we need > 5 sigma to claim we observe a process, so there’s still a long way ahead).

This is a preliminary result that paves the way for studies in this channel. Now we should focus on increasing our sensitivity. A possible way being to add the 7 TeV data to the mix, where we have less events but also less background or try to model better the top-pair background (to reduce the uncertainty related to it).  In any case, to reach the Tevatron sensitivity in the s-channel will not be an easy task and we may have to wait for larger statistics in the next run.