[CMS Stories] It all started with watching documentaries about outer space... 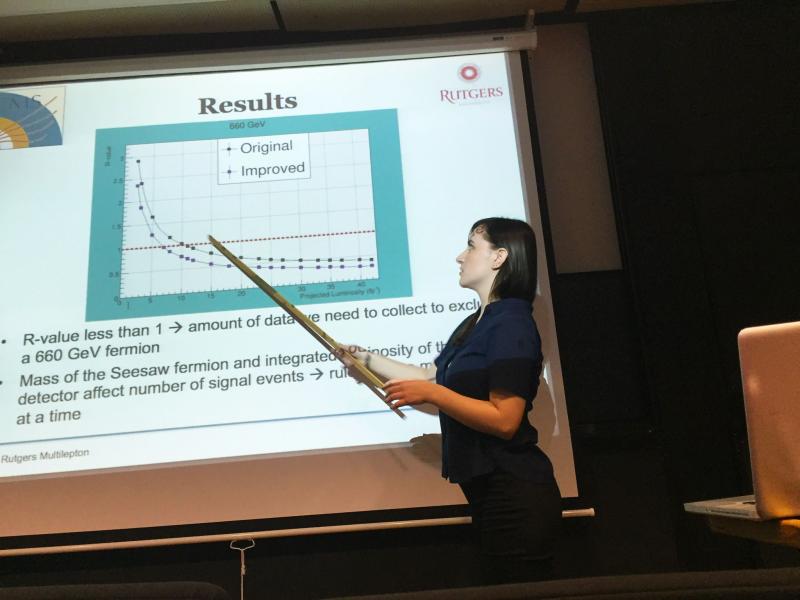 Presenting at Rutgers in 2016

When I was a young girl, my dream job was to be a math teacher because I enjoyed being in school and learning.  As I entered junior high and high school, I started reading popular science books and watching documentaries about outer space which ignited my curiosity for astronomy and physics - this opened my eyes to careers where I could investigate the nature of the universe.  I participated in a week long program at Michigan State University that introduced me to what academic physics research was like when I was a high school student. I continued exploring my interests as an undergraduate at Indiana University, working on a project about dark matter in galaxies, and then switched my focus to particle physics with the Rutgers CMS group for a summer.  For my last year of university, I was even able to go to CERN for a few months while working with the Indiana University (ATLAS) group. This was my first time out of the United States and it was amazing!  I knew then that I definitely wanted to continue with physics in graduate school and get another chance to be at CERN.

I then moved to California to graduate school at UC Davis where I immediately started with their CMS group. Right after I finished classes and before it was time to move to CERN last summer, I took an epic road trip with my friend who was moving to Fermilab and we drove from California back to my home in Indiana with stops along the way at Zion National Park and the Grand Canyon. Now I have been at CERN since July 2019 and it has been spectacular. I had a lot of fun welcoming visitors during Open Days 2019 as I worked at the bus stop of Point 5 (plus I was able to practice my French), and on the weekends I have gone on hikes in the stunning Swiss landscape with the friends I made working at CERN.

Neither of my parents completed university degrees and I usually found my physics classes to be difficult, but I was determined to follow my dream to become a scientist. I am so glad pursuing physics allowed me first to move to California and see the western United States and now all the way across the world to see beautiful France and Switzerland.  Not to mention every morning I wake up and get to work on truly the most fascinating scientific experiment happening today!